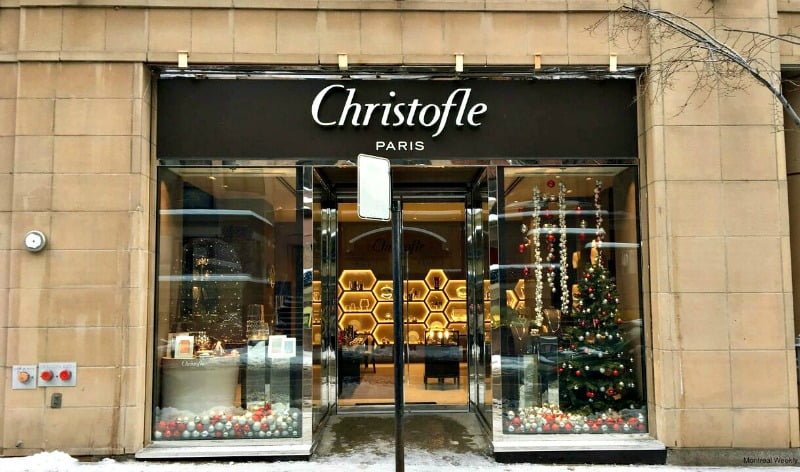 Paris-based luxury brand Christofle has opened a freestanding boutique in Montreal, with further plans for Canada as it launches a North American store expansion. Christofle is the latest luxury boutique to open in an area that is fast becoming a luxury destination for the city.

The Montreal boutique, located at 2015-2025 Rue de la Montagne, measures about 1,100 square feet and features Christofle’s range of jewellery as well as flatware, tableware, home and gift items. The space includes honeycomb-shaped display cases and dark fixtures with bright lighting, highlighting merchandise that can sometimes be priced into the thousands. More Canadian locations are expected to follow as Christofle expands its base of corporately-owned stores in North America. Christofle, which was founded in Paris in 1830, recently opened U.S. stores in New York City (Soho) as well as on prestigious Oak Street in Chicago. It now operates 10 freestanding boutiques in eight U.S. cities (New York City x2, Los Angeles x 2, Boston, Chicago, Dallas, Houston, and Florida: Bal Harbour and Palm Beach) and is also carried in leading jewellers and department stores.

Christofle’s existing concession on the ground floor of Montreal’s Ogilvy store will close at the end of January, according to Christofle. A freestanding Toronto Christofle boutique at 150 Bloor Street West closed several years ago, prior to a building renovation that saw the opening of flagship Louis Vuitton and Tiffany & Co. stores in the 150 Bloor podium.

Christofle’s Rue de la Montagne store is the latest luxury boutique to open in the area. A franchised Montblanc boutique, located adjacent to Christofle at the corner of Montagne and Boulevard de Maisonneuve, opened in the spring of 2014. Tiffany & Co. opened half a block north at 1290 Sherbrooke Street West in February of 2012. Other retailers on the street include luxurious Chateau d’Ivoire jewellers, AllSaints, Anthropologie and Diesel, with SuitSupply set to open its largest Canadian location on the street soon, as well. More luxury brands are expected to secure space on the street with the opening of a 220,000 square foot combined Holt Renfrew/Ogilvy store at Sainte Catherine Street and Montagne, expected to be finished in late 2018. A Four Seasons Hotel and Residences will also open adjacent to Ogilvy/Holt’s in the winter of 2018, featuring pricey hotel rooms and 18 condominium units believed to be priced between $4 million and $20 million each — further adding to the luxury cachet of Montreal’s Rue de la Montagne.

*Thank you Maxime Frechette, Retail Insider Montreal correspondent and founder of Montreal Weekly, for alerting us to this store opening.