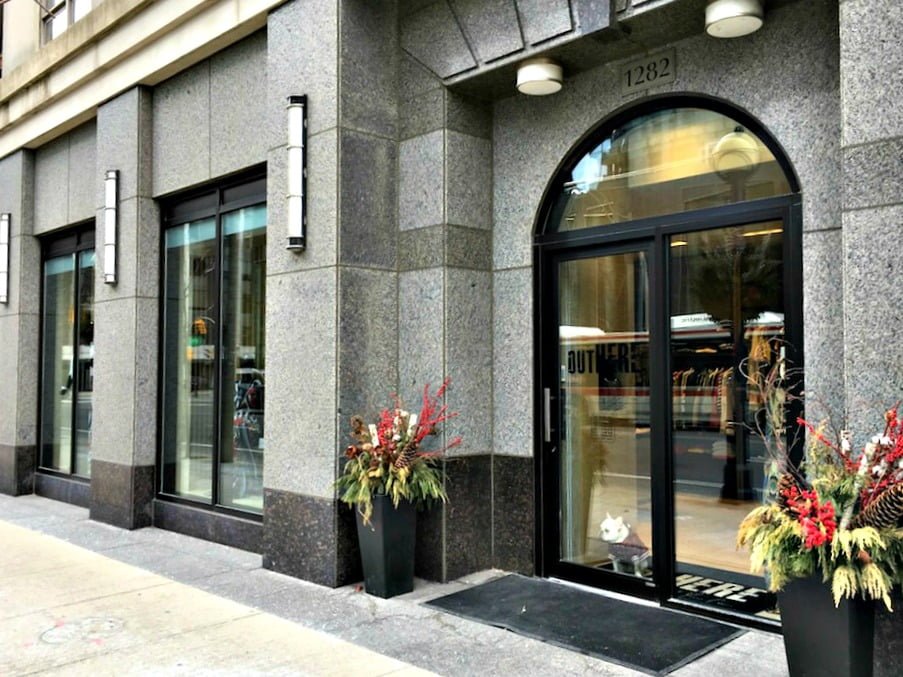 Canada’s first and only women’s luxury boutique dedicated to Brazilian designers, called outHERE, recently opened in a prominent location in Toronto, and is already considering expansion. The boutique’s stock includes a number of stunning evening gowns, which have caught the attention of locals and even some celebrities. The store is also unique in that a considerable amount of its profits are donated to charity, including the building of an orphanage in Africa.

Entrepreneur Marcus Chaves and partner Gabriel Cesar operate the 800 square foot storefront at 1282 Bay Street, in Toronto’s affluent Yorkville area. The boutique is located at the base of the prestigious Regency condominium building, across Bay Street from the city’s flagship Four Seasons Hotel and Private Residences.

Mr. Chaves’ mother, who has been in the fashion business for over 40 years, inspired him to get into the retail business, he explained. He worked with her for a number of years in New Jersey before moving to Toronto in 2010 to work in the event planning business. After getting to know a considerable number of affluent Toronto women, not to mention their fashion preferences for formal events, he decided to take a risk and begin selling women’s fashions. In April of 2016, he started seeing clients at their homes and several months later, he and Mr. Cesar decided to invest in their own retail space.

The store is already a hit, which can be attributed to both customer service as well as a unique product offering. Mr. Chaves explained that he buys pieces for his store with certain clients in mind, and in some instances, he’ll bring in edgy pieces for women wishing to ‘push the boundaries’.

Being in Yorkville is strategic for outHERE, explained Mr. Chaves. The area is affluent and growing quickly, and it’s also close to other affluent neighbourhoods such as Rosedale and Forest Hill. Clients also come into the store from Oakville, Muskoka, and even as far away as London ON, Ottawa and Montreal. Yorkville locals, who may discover the store by walking by, are becoming loyal clients as well, he explained.

Instagram has been key to building brand awareness, Mr. Chaves explained. He’s built relationships with clients who have seen his merchandise on the social media platform. The store’s adorable and friendly French Bulldog Bento also has his own Instagram account, with over 200 followers.

Approximately 90% of outHERE’s stock is from 12 Brazilian designers, with almost all of them being exclusive in Canada. Prices range between $500 and $10,000, with the upper-end items including impressive hand-beaded gowns.

The store also carries Canadian outerwear designer Sentaler — one of the only brands that isn’t from Brazil. Known for its alpaca coats and made famous by Princess Kate Middleton, Sentaler is also involved in various charitable activities — something that attracted Mr. Chaves, who is also extensively involved in philanthropy.

Mr. Chaves explained that he’s not out to ‘get rich’ from outHERE — rather, much of the store’s profits are going towards funding a 600-child orphanage in Mozambique. It was his sister’s involvement with Missions Ministry that inspired him to take up the cause, and the family has already sponsored hundreds of youth in need. He’s also looking to further expand the family’s charitable endeavours as outHERE becomes increasingly profitable.

Mr. Chaves and Mr. Cesar are looking to eventually expand outHERE to other Canadian cities, and will first test the markets with temporary pop-up locations. Vancouver and Montreal are targeted cities and if women in those cities are receptive to outHERE’s merchandise and concept, permanent locations could follow.

Within the next year or so, outHERE is also looking to launch an eCommerce site — or possibly a site with VIP access for selected clients. Mr. Chaves explained that while it’s good to have the retailer’s product visible to potential clients, shoppers are better served to actually try product on before buying it, to ensure that the fit is perfect. As well, face-to-face interaction is part of the experience in outHERE. “It’s all about the service,” says Mr. Chaves.