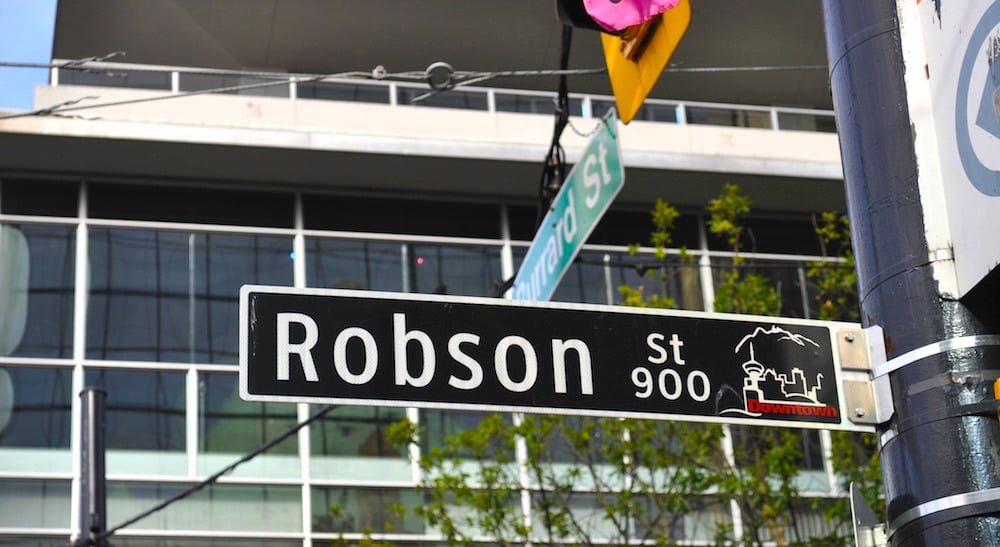 Vancouver’s iconic Robson Street is in a state of transition and it has a bright future, according to experts and brokers involved in deals in the area. A number of retailers have recently opened or are renovating/expanding their stores, and a number of exciting new retailers have been announced, including one of the world’s largest MUJI flagships.

Robson Street has been popular for decades, having morphed in the 1990’s from being the German-influenced ‘Robsonstrasse’ neighbourhood high-street to something of an open-air shopping centre, lined with national and international tenants. The busiest strip includes the 900, 1000 and 1100 blocks, which are located between Hornby Street to the east, and Bute Street to the West.

The 900 block, between Hornby Street and Burrard Street, has a diverse variety of retailers ranging from Foot Locker to Salvatore Ferragamo. One of the world’s largest Victoria’s Secret stores is located at the northeast corner of Burrard and Robson Streets, and two years ago Lululemon constructed its flagship on the southeast corner. Electric vehicle brand Tesla operates a busy showroom mid-block.

The 1000 block of Robson Street, located between Burrard Street and Thurlow Street, is generally considered to be the busiest of the three blocks. Roots has a recently-renovated flagship at the northwest corner of the Burrard Street and Robson intersection, and L’Occitaine en Provence opened a beautiful space on the southwest corner in the fall of 2014. Forever 21 operates a large store mid-block, and a number of other prominent retailers include Zara, Club Monaco, Boys’Co, Sephora and Browns Shoes, and Saje Natural Wellness’ global flagship operates at 1091 Robson Street. Banana Republic has a three-level flagship on the southeast corner of Robson and Thurlow Streets, and Starbucks operates a very busy location on the intersection’s northeast corner.

Robson Street’s 1100 block, between Thurlow Street and Bute Street, features a massive Aritzia flagship on the intersection’s southwest corner, as well as a recently-renovated Camper store on the northwest corner. London Drugs anchors the west end of the block, which includes a number of smaller retailers as it passes onto the 1200 block, west of Bute Street.

The 1100 block saw line ups for several weeks when Parisian luxury bakery Ladurée opened its first Canadian location in the spring of 2016. The street will be getting another very significant injection later this year when MUJI opens its Canadian flagship at 1125 Robson Street.

It won’t be just any MUJI flagship however, and the store will be larger than originally announced — spanning about 16,000 square feet, MUJI will take over the roughly 10,500 square feet of space recently vacated by The Gap, as well as an additional 5,500 square feet of rear retail space once occupied by denim retailer Below the Belt (including its massive rounded glass atrium/skylight). There are currently three MUJI stores open in Canada, all of which are in the Greater Toronto Area, ranging in size between 4,400 square feet and 6,375 square feet.

Robson Street’s 1100 block currently has a number of vacancies, but those are only temporary, according to Martin Moriarty, Associate Vice President at CBRE in Vancouver. CBRE has been more active in downtown Vancouver than any other brokerage (signage with Mr. Moriarty and Mario Negris’ names are prominent throughout the city) and the duo are doing deals in many areas, including on Robson Street.

Mr. Moriarty explained that while Robson Street might appear to be struggling, it’s undergoing the kind of transition being seen in various global cities. “Robson has been adapting to challenging retail trends felt globally and impacting most major retail nodes – in London, Regent Street went through a similar process and we’ve seen vacancy at unprecedented levels in New York’s prime corridors of late.” He went on to say, “despite this, there has been a significant uptick in activity/interest on the street and particularly on the 1100 block. With the caliber of tenants moving in soon, we fully expect this to continue.”

When asked what types of retailers we might see on Robson Street in the next several years, Mr. Moriarty explained that “there continues to be a desire from local, national and international groups to have a Robson St “presence”. That said, I believe that there is a kaleidoscope of international users, primarily in the “fast fashion” genre that will drive the landmark deals on Robson”. Referencing some of the larger retail spaces that are currently (and soon will be) available both on the 1000 and 1100 blocks, Mr. Moriarty noted that “when you consider the street profile, the size of those spaces and the rents involved, there tends to be only a few users that “fit the bill”. I think international “fast fashion” suits Robson and ultimately that will be the category driving landmark deals.”

Mr. Moriarty noted that CBRE has been busy over the past 12 months, having done lease deals for retailers including Reigning Champ, MUJI, Nike, Bailey Nelson, Ladurée and Eyestar. More are on the way but due to confidentiality, he couldn’t go into further detail.

Brodie Henrichsen, Principal at brokerage Northwest Atlantic, explained that there is still considerable demand for flagship retail opportunities on Robson Street, and that finding the “right” space can be a challenge for some retailers.

Although CF Pacific Centre is a very strong retail centre, Mr. Henrichsen said that most major retailers still want a street front presence, if available. “I still believe in Robson Street,” said Mr. Henrichsen. “The walking traffic is immense, and there are a lot of tourists,” he said. He also noted that while Robson Street sees a substantial amount of tourists, CF Pacific Centre’s shoppers are mostly locals. “That’s why there are duplicate retailers such as Sephora, Aritzia, Club Monaco and Lululemon” on Robson Street as well as in the mall, with Lululemon having just opened a store at CF Pacific Centre on the mall’s lower level.

Referencing the 1100 block of Robson Street, Mr. Henrichsen noted that the street is “headed in the right direction” with the addition of retailers such as Skechers, Steve Madden, Laudrée, Nike, and MUJI (coming later this year) and that the primary three-block stretch of Robson street is well suited for major high street brands. “The street will continue to evolve,” noted Mr. Henrichsen, going on to say that there may be some redevelopment opportunities in the works for some of the street’s older buildings.

Ms. Smith pointed to a number of endeavours to enhance the area, which are bringing people to the area to shop, as well as to relax. A new public plaza was recently created on the 800 block of Bute Street by closing a street to vehicle traffic, and the pilot project could become permanent if everything works out as planned.

Some positive developments are going to be happening on the street — including the redevelopment of four smaller retail spaces on the 1000 block between Sephora and the Manhattan Block, which will be occupied by one large retailer that will be announced at a later date.

Raymond Shoolman, retail expert at DIG360 Consulting Ltd., explained how Robson Street has lost some of its lustre to the city’s historical Gastown area, which has recently reclaimed its ‘cool factor’ with the addition of innovative retailers and restaurants/bars. He suggested that in order to further revive Robson Street, making it an ‘entertainment area’ would be of assistance — not to mention adding new and expanding existing retailers. He noted the recent renovation of Roots and the expansion of Aritzia as being positive additions to the street, and suggested Robson would benefit from utilizing some of the successes in Gastown. That might be a challenge, he noted, given Robson Street’s unforgiving high rents and multiple landlord situation.

Mr. Shoolman also noted that the rise of CF Pacific Centre, including the addition of a Nordstrom flagship in September of 2016, have drawn shoppers eastward towards Granville Street. CF Pacific Centre is anchored by an extremely productive Holt Renfrew, a Hudson’s Bay flagship, and what some are saying is Nordstrom’s top-selling location in the entire chain.

This is the first in a series of articles where we profile high streets and important retail areas in major Canadian cities. We are also profiling shopping centres, with our initial piece describing Toronto’s Bayview Village.