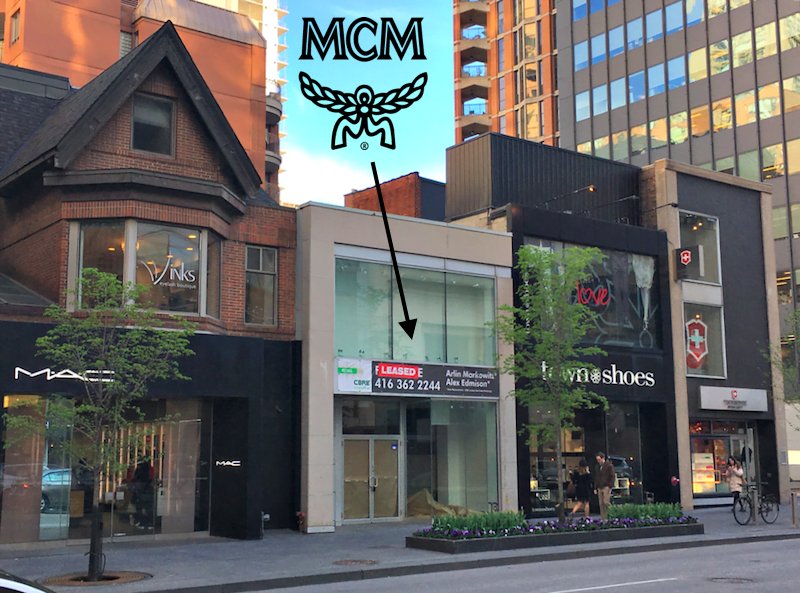 German-founded luxury brand MCM will open its first Canadian store on Toronto’s Mink Mile this fall, and it likely won’t be the country’s last. MCM is said to be doing robust wholesale business in Canada at retailers such as Holt Renfrew, Saks Fifth Avenue and Nordstrom, helping prompt a Canadian store expansion.

Founded in Munich in 1976, MCM is known for accessories and other products in its signature logo-printed material (called Cognac Visetos), similar to Louis Vuitton‘s monogram canvas. MCM (which originally stood for Michael Cromer München) was especially popular in the 1980’s for its flashy, logo-printed accessories. South Korean fashion conglomerate Sungjoo Group acquired the brand in 1995, and the brand is having a major resurgence.

MCM’s first Canadian store will open this fall at 93 Bloor Street West in Toronto, in a retail space formerly occupied by Nine West Shoes. The 2,150 square foot store will be directly across the street from Harry Rosen’s flagship, as well as Holt Renfrew Men and a new Hermes Maison at 100 Bloor Street West.

The CBRE Toronto Urban Retail Team negotiated on behalf of the landlord in the deal, under the direction of Arlin Markowitz, Alex Edmison and Jackson Turner.

MCM’s moving into 93 Bloor Street West could be a signal for more luxury brands to open nearby — on the south side of Bloor, luxury retailers typically locate to the west of St. Thomas Street (except for Hugo Boss, currently at 83 Bloor Street West).

Approximately 60% of MCM’s sales come from Asia, with the remaining 40% coming from Europe, the Middle East, and the Americas. Given the brand’s penetration in Asia, Vancouver is a likely target city for at least one freestanding MCM store.

Last year, the company saw revenue in excess of US $700 million, with a goal of US $2 billion in sales globally by the year 2019. The brand has surpassed Versace in terms of overall sales and in the South Korean duty free market, which is the largest in the world, MCM is second only to Louis Vuitton in terms of sales.

While the new Toronto store will be the first corporate MCM location in Canada, MCM had two free-standing licensed Canadian boutiques in the early-to-mid 1990’s, both in the resort town of Banff, Alberta. One was located at the Banff Springs Hotel and the other was downtown at Cascade Plaza, alongside Polo Ralph Lauren and Louis Vuitton. All have since shuttered as retail in the Alberta town has become less upscale. At the height of its popularity in 1993, MCM boasted 250 stores worldwide with sales in excess of $250 million. After flooding the market with product while at the same time becoming subject to counterfeiters, the brand folded in 1995, followed by a restructuring in 1997.