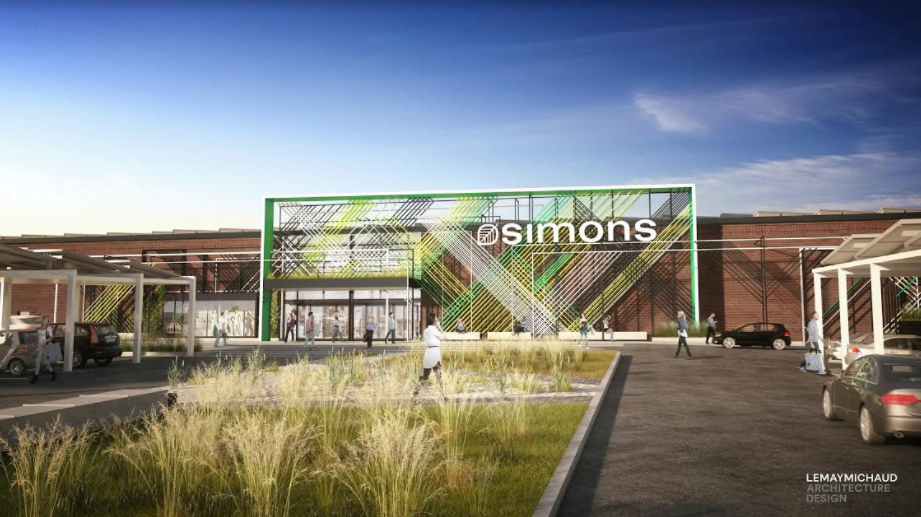 Simons is moving into part of the space that was vacated by Target in 2015, when the Minneapolis-based retailer exited its Canadian operations.

“This is the very first store where the concept of ecology will be ubiquitous”, said company president Peter Simons. The store will occupy about 80,000 square feet and will feature solar panels and recharging stations for electric cars, among other innovations. “The goal is to achieve a zero net footprint”, said Mr. Simons.

The store will also be a prototype, providing “a unique and improved customer experience through new digital and interactive technologies” that will initially be tested in the new store before being introduced to other Simons locations.

The store officially opens on Thursday, March 15, and Retail Insider will publish a feature article that will include photos of the highly anticipated new store.

Blubird to Relocate on Alberni

Vancouver-based fashion retailer Blubird will be relocating its 1000-block Alberni Street flagship to Alberni’s 1100 block this spring, as the street continues to transition to become one of North America’s leading luxury addresses.

Blubird carries a range of popular women’s contemporary brands in two locations — a downtown store that will be relocated in May, as well as a location at Oakridge Centre on Vancouver’s West Side. Blubird is owned by Vancouver-based fashion conglomerate Vestis Fashion Group, which also holds licenses for Western Canada’s Max Mara and Pomellato stores.

Blubird will move into the former Strellson retail space at 1108 Alberni Street, vacating its current 1055 Alberni Street space that it has occupied for about a decade. The new Blubird will span about 2,200 square feet at the base of the 745 Thurlow Street office tower, which also houses Brunello Cucinelli and Versace along its Thurlow Street side.

Alberni Street’s 1000 block is transitioning to become a significant luxury address, with recent store openings such as Van Cleef & Arpels, IWC Schaffhausen, Hublot and others — Tiffany & Co. recently expanded, Jimmy Choo will open nearby this year, and Cartier and a new Hermes flagship are going to be announcing stores in the area soon.

Vancouver-based Peregrine created many of the fixtures in the the Bluebird space that opened in the spring of 2018. Photos can be found here.

Canadians are actively using mobile devices for shopping and, according to a 2017 Neilson study, 67 per cent of Canadian smartphone mobile payers are or will become mobile wallet users in the next six months. Oxford Properties’ Hillcrest Mall in Richmond Hill, recently introduced AliPay and WeChat Pay at Guest Services to capitalize on the uptake in consumer use of mobile pay systems. By allowing customers to use mobile pay services to purchase gift cards, Hillcrest says they saw an increase in sales of over 636 per cent as compared to February of 2017.

To introduce this service to shoppers, Hillcrest offered a special promotion which ran from February 1st to 18th, which saw customers who purchased an Oxford Gift Card Plus with a minimum $200 spend receiving a bonus $10 gift card in return (maximum spend of $7,500 per person). Customers who paid with WeChat Pay or AliPay qualified to receive a discount of ¥2018 Renminbi currency on gift card purchases.

In addition to Guest Services, other Hillcrest retailers have also embraced the use of mobile pay systems. Sporting Life and Chatime/Bake Code also accept payment by both WeChat and Ali Pay, and the Nespresso cafe is completely cashless.

The popularity of tapping a card to pay now feels completely natural to shoppers and introducing mobile pay is a strategic and logical next step that Hillcrest and Oxford Properties are embracing.

This week Lennard Commercial Real Estate is offering up an investment opportunity in Rigaud, Quebec, near the Ontario border with great growth potential.

The current owner is seeking to divest and retire (most likely to a warmer climate) and has offered for sale this complete property which includes the Hudson Inn Auberge Hotel and multiple restaurant components: Pizza Hut, Subway, Burger King, Harvey’s, Tim Hortons, and Eggcellent. There are two gas stations on the property drawing in traffic, a Petro Canada and an Esso, but they are not included in this offer.

The restaurant tenants have great brand name pull and combined with the gas stations and hotel, makes this property primed for retail expansion. The property faces the Route 201 highway and the wooded area can be built on to increase development opportunity.

INDOCHINO Excels at Following Their Designs

Innovative Vancouver-based INDOCHINO, the world’s largest made-to-measure menswear company, is on track with its aggressive North American expansion mode that will see it open four new locations in the southern United States this spring.

The four new “designed by you” showrooms are to be launched in key business centres with thriving young professional populations, beginning with Charlotte, North Carolina on February 23, followed by Texas showrooms Houston (March 2nd), Austin (April 20th), and Dallas (April 27th). According to CEO Drew Green, these four locations “are already home to thousands of customers who shop with us online and are strong ambassadors of the INDOCHINO brand.”

It was less than three months ago, in December 2017, Retail-Insider reported that INDOCHINO announced plans to open up to 18 locations in 2018 following the 8 which opened in 2017.

INDOCHINO launched and established itself online before opening its first bricks and mortar location in Vancouver’s Gastown in 2015 and is continuing to make strides with its immersive and engaging showrooms and its three-week delivery promise on all orders.

Heidi Sopinka is perhaps best known around Toronto as the shop owner and co-founder of Horses Atelier. With a diverse life story that includes time as a bush cook in the Yukon, travel writer in Southeast Asia and a helicopter pilot, one is not surprised that her first novel The Dictionary of Animal Languages is as eclectic as herself.

Sopinka has crafted a story of love, longing, and art set in interwar Paris and appeals to readers of All the Light We Cannot See and The Disappeared. The story revolves around renowned artist Ivory Frame, who in her nineties is a famously reclusive painter who never married, had neither a family nor a child. After finding out she has a grandchild, her world is turned upside down. She soon finds herself returning to a project she had begun in Paris decades ago, and which will consume the rest of her life: a dictionary of animal languages. Part science, part art, the dictionary strives to transcribe the wordless yearning of animals, the lonely and love-laden cries that expect no response.

The Dictionary of Animal Languages, her first novel, is published by Penguin Random House, and is forthcoming in the UK, US, Australia, New Zealand, and will be translated into Polish. Available now at GoodReads.com.

[Courtesy of Randy Harris, President of Trendex North America] H&M, Canada’s seventh largest apparel retailer during 2016, probably moved up two notches in 2017 as a result of a 7% increase in the company’s total sales during the past year. The retailer, whose sales during its fiscal year December 1, 2016 – November 30, 2017 totaled C$692 million, added 8 stores and closed two stores. At the end of the year, the retailer operated 91 stores (vs. 536 stores in the U.S.). Six of the Canadian stores were COS stores. During its fourth quarter ending November 30, 2017, H&M Canada’s sales decreased by 2% even though it added a net of three stores during the quarter.

For all of 2017, H&M Canada’s parent company reported worldwide sales of C$35.3 billion, an increase of 3% over sales the previous year. During 2017, H&M opened a net of 388 new stores, and ended the year with 4,739 stores in 69 countries. The retailer’s profits decreased 13.2% for the year. During 2018 H&M plans to enter Uruguay and the Ukraine. Additionally, in recogni-tion of the growing importance of e-commerce, H&M plans to open on Tmall, the world’s largest e-commerce platform. [Trendex’s monthly Newsletter available at http://www.trendexna.com/can-apparel-insights]