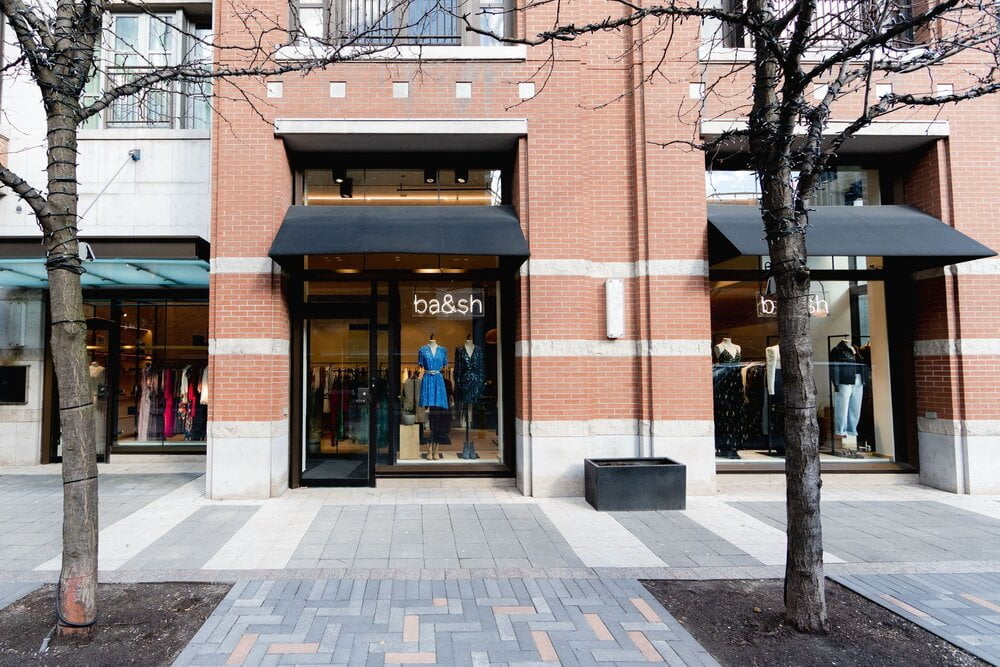 French women’s fashion brand ba&sh is expanding into Canada this spring/summer with the opening of two standalone stores in Toronto and Montreal. The brand could open more standalone storefronts after entering the Canadian market last fall in partnership with several multi-brand retailers.

The Toronto ba&sh retail space, which is the first corporately owned standalone unit in Canada, opened in mid-March for only two days before shutting down because of the COVID-19 pandemic. The 1,300-square-foot store reopened last week in a retail space at the base of the Hazelton Hotel at 118 Yorkville Avenue. A Louis Black jewellery store once occupied the space and most recently, the retail space housed pop-ups including a goop MRKT for several months as well as a pop-up for a home furnishings brand called Desperato.

The ba&sh store opening comes at an unprecedented time. The store now includes enhanced sanitization as well as virtual appointments, curbside pick-up, and ‘consignment’ where consumers can have pieces sent to their home to try on before making a purchase.

In July or August in Montreal, ba&sh will open its second location at 4932 Sherbrooke Street West in Montreal’s Westmount area. The boutique will be located among other upscale brands in the affluent community which is home to some of the wealthiest people in Montreal.

A company representative said that a dedicated Canadian ecommerce site will be launched later this year.

Prior to the COVID-19 shutdowns, more standalone Canadian locations were said to be on the way as ba&sh aimed to grow its Canadian presence with a network of stores. One might anticipate that the Vancouver market could be in line for a store if the previous expansion plans continue.

Jeff Berkowitz of Aurora Realty Consultants represents ba&sh in Canada and negotiated the Toronto and Montreal lease deals on behalf of the retailer. First Capital Realty owns the Hazelton Hotel, as well as much of the retail space on Yorkville Avenue.

Last fall, ba&sh opened a pop-up space at the Yorkville Village shopping centre in Toronto in a partnership with local retailer TNT. It remained open until the new 118 Yorkville Avenue store opened to the public briefly in March. Last fall, as well, ba&sh partnered with the Hudson’s Bay Company to open ba&sh shop-in-stores inside Hudson’s Bay locations in Toronto, Montreal and Vancouver. Holt Renfrew also carries the ba&sh line at its stores in Canada currently.

Two best friends, Barbara Boccara and Sharon Krief , founded ba&sh in Paris in 2003. The name ‘ba&sh’ is a hybrid of their first names, utilizing the first two letters of their names with an ampersand in between. The brand is said to be a hybrid of “rock and roll and bohemia” with a focus on feminine clothing that is also comfortable. Collections include ready-to-wear, bags, accessories and footwear. The price-point is in the ‘contemporary’ range with dresses generally in the $400-$1,000 range, blouses costing in excess of $300, bags priced over $500, and shoes priced into the hundreds of dollars depending on style.

Following a significant investment by LVMH, ba&sh has had the funding and backing to expand its operations internationally which will see ba&sh become a true global brand. In the United States, ba&sh opened a US headquarters about two years ago and the company currently operates 10 stores in the country. Department stores in the US carrying ba&sh include Nordstrom, Bloomingdale’s and Neiman Marcus. ba&sh also has stores in countries globally as well as wholesale distribution in various multi-brand retailers.

The first draft for this article was written in early 2020 in anticipation of the two store openings. At the time, we had noted that a high number of international brands were looking to enter the Canadian market by opening stores in 2020 and 2021. The COVID-19 pandemic has created an unexpected situation where many brands have pulled back on expansion plans as consumer spending patterns shift. Over the past three years, more than 110 international brands have entered Canada by opening stores. We calculated that in 2017, a record-breaking 50+ brands entered Canada by opening stores and in both 2018 and 2019, about 30 international brands opened their first Canadian locations and many of them have plans to further open locations as they expand into new markets.

We’ll continue to monitor store openings in Canada — even though COVID-19 has proven challenging for many brands, some will still be opening stores in Canada regardless. We’ll also follow up on ba&sh’s expansion plans in Canada after the company opens its new store in Westmount in either July or August of this year.

Canadian Retail News From Around The Web For September 28th, 2022

Canadian Retail News From Around The Web For September 27th, 2022