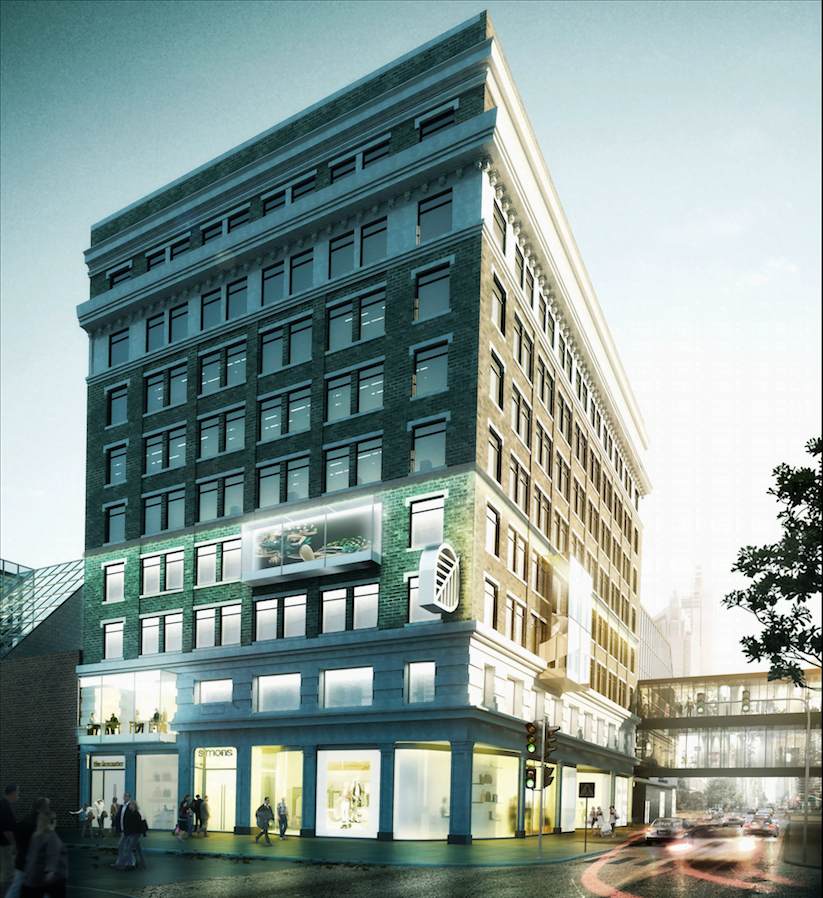 The new store will be designed by innovative Calgary-based design firm McKinley Burkart, which will maintain the Lancaster Building’s architectural heritage. As with other Simons locations, the interior is expected to be bright and modern. Mr. Simons confirms that a significant art installation will be featured in the store, as is the case with all new Simons locations. The 10-floor Lancaster building was constructed in the year 1919, and the top floors of the building will continue to be dedicated to office space.

Besides occupying four floors in the Lancaster Building, Simons will take the adjacent ground floor retail space, occupied on the lease plan by TD Canada Trust. On the mall’s second-level, almost 11,000 square feet next to Harry Rosen will become occupied by Simons, with a pedestrian walkway separating Simons’ retail space. We’ve included lease plans, above, to try to convey the unique and somewhat complicated configuration of the new Simons store, which will see its four retail floors span the adjacent Lancaster Building and TD Square component of The CORE.

Simons’s first location outside of the province of Quebec opened in October of 2012 at West Edmonton Mall. Measuring about 126,000 square feet, it’s the chain’s largest and according to sources, the second-highest selling in the company.

Calgary’s CORE shopping centre spans almost 567,000 square feet on three levels. Its anchors include a 147,000 square foot Holt Renfrew, a 30,650 square foot Harry Rosen, and a 20,000 square foot Brooks Brothers store. The mall is managed by 20 VIC Management Inc. and is owned by AIMCo and Ivanhoé Cambridge. The mall serves a daytime population of approximately 175,000 people, and has a sales productivity of $609 per square foot.

Simons was founded in Quebec City in 1840. The retailer is unique in how it pairs its substantial private-label fashion with a handful of higher-priced designers. Despite its large floorplates, Simons stores lack cosmetics departments and the large footwear areas typical in similar-sized department stores. Simons currently operates nine stores, including eight in the province of Quebec and one in Edmonton. The company has over 2,000 employees.