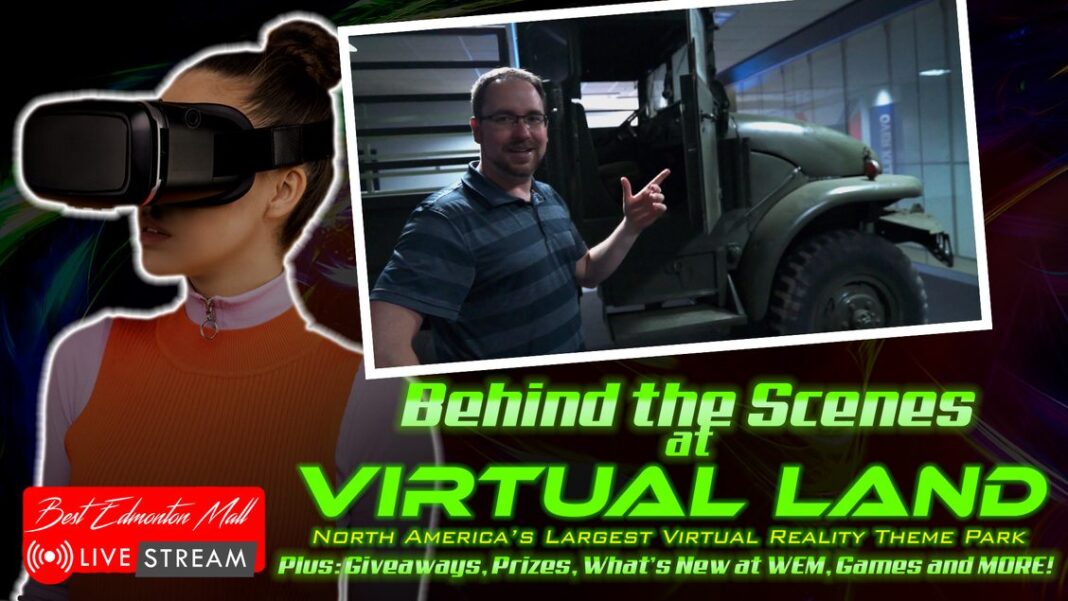 Virtual Land will move into part of the retail space formerly occupied by The Brick furniture store in the mall’s Phase 3 — The Brick relocated to the second level of the former Sears store in Phase 1 in the fall of 2019.

More than a dozen themed virtual reality experiences will be featured at Virtual Land, including a military-themed experience, one featuring zombies, and another that will be viking-themed. Virtual Land has gone to great lengths to create these experiences including retrofitting a former Canadian military vehicle as part of the attraction. More details will be unveiled closer to the opening date which is expected to be in August, according to Best Edmonton Mall.

All-day passes for Virtual Land means that visitors will get to try all of the themed virtual reality experiences at one price, creating another attraction for the largest shopping centre in North America. It’s part of an effort to bring in more people to West Edmonton Mall following pandemic lockdowns with consumers staying away from physical spaces. Various other attractions at West Edmonton Mall include the massive Galaxyland amusement park, World Waterpark, Professor WEM’s Adventure Golf, the Ice Palace skating rink, Ed’s Bowling, and many others. West Edmonton Mall is the largest shopping centre in North America and it recently added several luxury brands including Louis Vuitton, Saint Laurent and Gucci. A massive Toyota dealership will also open this fall downstairs from The Brick in Phase 1 — Mayfield Toyota, which is relocating from a standalone location north of the mall, will be rebranded as ‘WEM Toyota’ to coincide with the move. Included will be car detailing and valet parking for the mall.

West Edmonton Mall also boasts a super-fan who’s efforts around promoting the centre’s past and present are unlike anything we’ve ever seen. Matthew Dutczak founded Best Edmonton Mall in 2016 with a Youtube channel and has been posting content since. Several months ago he launched a bi-weekly Youtube channel discussion segment that takes place biweekly on Friday evenings at 8pm Mountain Time/10pm Eastern where he showcases something to do with the mall, followed by an interactive discussion where other fans of the mall are able to converse and share thoughts about the mall and other topics.

The quality of the production of these bi-weekly segments is exceptional, with Dutczak producing and hosting every show from the basement of his home in Edmonton’s Millwoods area. His basement includes various arcade games as well as a mini West Edmonton Mall museum. The Youtube segments have something of a retro 80s theme including different opening segments with music from TV shows from years past, as well as prizes, contests and a humorous segment (including a catchy theme song) where Dutczak affixes either a button or pin to his ‘Vest Edmonton Mall’ — a name for a vest that he wears that was coined by Retail Insider’s Dustin Fuhs.

Dutczak is something of a historian and he also produced a very interesting segment on the history of Heritage Mall in Edmonton — an interesting watch for anyone curious about the history of shopping centre development in Edmonton and Western Canada. The film was named a finalist in the 2020 Edmonton Short Film Festival.

The Best Edmonton Mall Youtube page has over 100 videos so far showcasing various attractions as they are, as well as what the mall looked like in decades past. Dutczak has also launched a website showcasing West Edmonton Mall’s attractions and history as well as a chat forum via Reddit. He also has an email list where viewers can subscribe to be notified of his next video, some of which may happen during the week depending on any new developments. One recent segment on the Best Edmonton Mall Youtube channel featured a discussion of the closure of Disney stores in Canada.