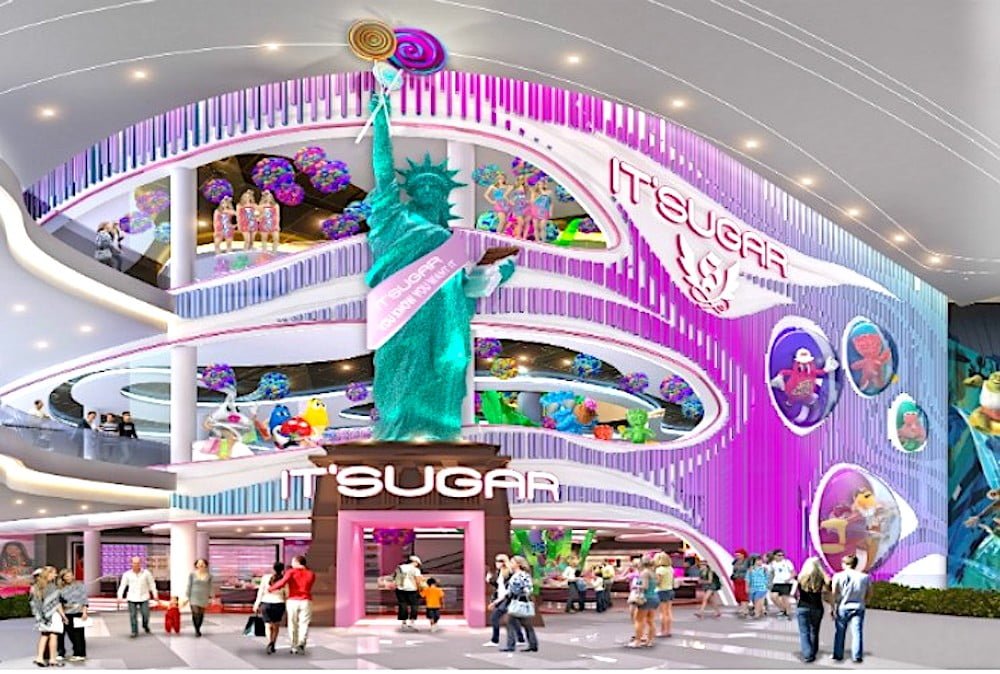 Kitchy US-based candy retailer IT’SUGAR is expanding into the Canadian market this year with its first store set to open at West Edmonton Mall in Edmonton.

The West Edmonton Mall storefront will span about 4,000 square feet on one level and will be located on the main floor of the mall beside an entrance to the Galaxyland amusement park. A West 49 store is located directly next to it and a Footlocker House of Hoops across the way.

The location will become an added attraction to West Edmonton Mall which years ago had a large candy store that has since closed. The chosen location next to Galaxyland is strategic with a corner storefront that has high visibility both to shoppers in the mall as well as those in the amusement park.

IT’SUGAR has become one of the largest of its kind in the world. Its website says that the retailer is “known for their absurd sugar innovations that celebrate lighthearted rebellion”. IT’SUGAR caters to young adults with sweets with names such as ‘Dingle Bearies’ (chocolate covered gummy bears) ‘Flinging Poo’ (chocolate covered banana chips) and ‘Schweddy Balls’ (based on the Saturday Night Live-inspired treat, being salty chocolate balls). Products range from well-known brand names to creations by the retailer. Many products are exclusive and private-label which also includes apparel and novelty items which make up an incredibly substantial part of the business.

The goal of IT’SUGAR is to create a positive customer experience. Posting brand messaging includes statements such as the brand encouraging “the world to not take itself too seriously” while providing “access to the pure joy that comes from indulging in a world with fewer rules and more sugar”.

Candy veteran Jeff Rubin founded IT’SUGAR in 2006. He grew up in Michigan where his family owned a candy store chain called Mr. Bulky — as a child he sold chocolate bars and bubblegum to his classmates. As an adult he joined US toy retailer FAO Schwarz in New York City where he operated the company’s candy department dubbed ‘FAO Schweetz’.

In 2000 he and Dylan Lauren (daughter to fashion designer Ralph Lauren) founded Dylan’s Candy bar and in 2005 they parted ways before he founded his own candy business.

IT’SUGAR operates almost 100 stores in the United States. The stores are located in major shopping centres, tourist attractions, outlet malls, urban street-fronts and even inside of Macy’s in New York City.

In 2017, BBX Capital invested in IT’SUGAR, enabling the retailer to grow faster including opening its largest location during the pandemic at American Dream near New York City. That three-floor store is described as being the “world’s first candy department store” spanning a whopping 24,000 square feet.

In Canada, it’s unknown if more locations will be opening. We’ll follow up on this story when IT’SUGAR opens its first Canadian store at West Edmonton Mall.