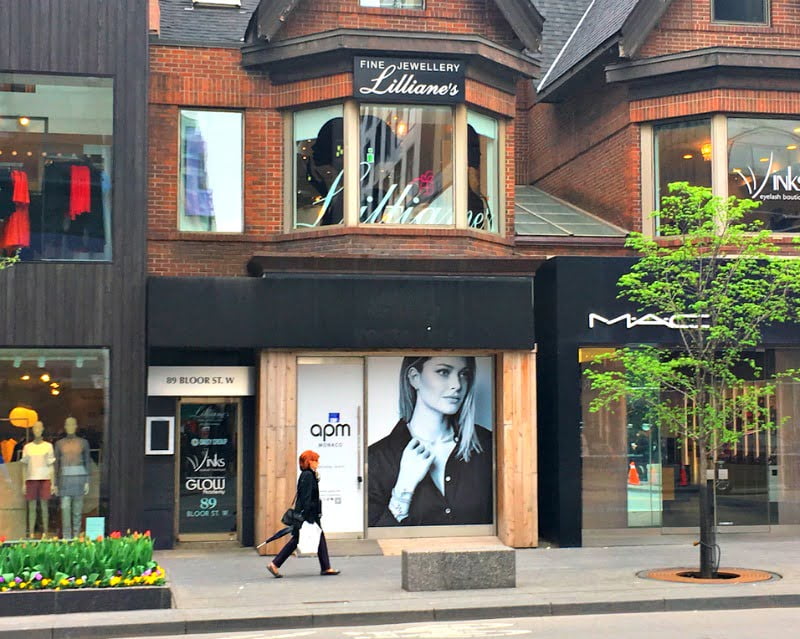 Upscale Monaco-based jeweller APM Monaco will open its first Canadian boutique this summer, in Toronto. More locations are expected to follow, with Vancouver being on the brand’s radar as it reportedly seeks out more Canadian retail space.

Construction signage went up last week for the new APM Monaco Toronto store, which will be located at 89 Bloor Street West, across from Harry Rosen and Holt Renfrew Men. The narrow 1,700 square foot 89 Bloor retail space, which was most recently occupied by Roots Kids, sat vacant for a time between 2011 and 2013. Jordan Karp and Ryan Morein of Paracom Realty represented APM Monaco (for the Bloor deal as well as for its national rollout), and  CBRE Downtown Toronto’s Arlin Markowitz, Alex Edmison and Jackson Turner acted on behalf of the landlord in a sublease deal involving Roots.

APM Monaco was founded in 1982 by Ariane Prette as a jewellery brand specializing in creating traditional gold, diamond and precious stone pieces for other jewellers. In 2011, the Prette family launched the new APM line (standing for Ariane Prette Monaco) that is made from 925 silver, 18-karat plated yellow and pink gold and cultured pearls from freshwater lakes, among other materials. Its products are handmade with their own manufacturer, to ensure consistency. Prices for pieces reportedly average about US $130, ranging between US $60 up to several thousand dollars for premium designs in gold.

Designs are “influenced by Monaco and the South of France,” according to the company, “with a touch of Monegasque flair”. Creative director Kika Prette (daughter-in- law of Ariane Prette) introduces a new collection each week, and produces 12 look books a year.

The company has over 130 stores worldwide, with 75 of those being in Asia (China, Taiwan, Singapore, Malaysia, Hong Kong, Macau) and Australia. The remainder are in Europe (France x 16, UK x 3 and one each in Monaco, Belgium, Switzerland, Germany and Italy), and it recently launched its US expansion with a location at Miami’s Brickell City Center. APM reportedly plans to open about 40 stores this year, with other north American locations that will include:

Women’s Wear Daily recently reported that APM Monaco is looking for more store locations in North America, and that Vancouver is on its radar. Given that about 3/4 of APM Monaco’s stores are in Asia, brand recognition would make Vancouver a logical choice, given its current resident population and tourist patterns. APM Monaco also appears to seek out premium addresses for its stores — finding a location around Vancouver’s Alberni Street ‘Luxury Zone’ could end up being a challenge, given lack of available space and intense interest from various other brands looking to set up shop in the area.

Craig Patterson - July 22, 2021
The tower at the corner of Yonge and Bloor Streets has had the Bay logo branding for almost 50 years.

Canadian Retail News From Around The Web For July 30th, 2021