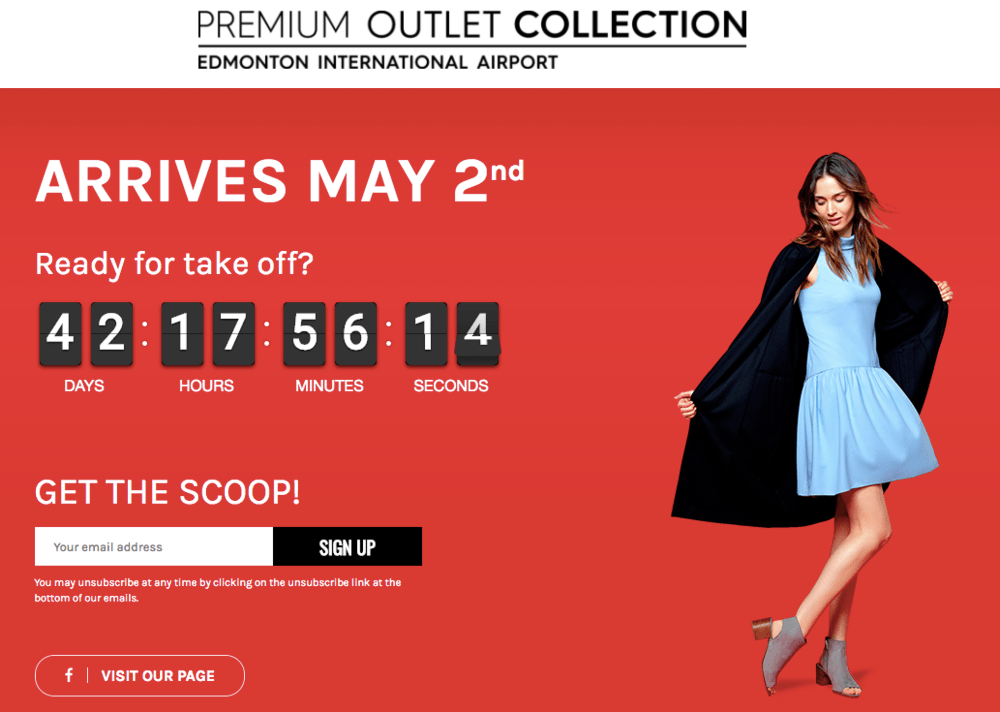 UPDATE: The centre is now open, and some new retailers have been announced/opened since our earlier article. Photos: Edmonton’s 1st Outlet Mall Opens to Massive Crowds [Photos]

Ivanhoé Cambridge and Simon Property Group have announced 70 tenants that will be opening at its Premium Outlet Collection Edmonton International Airport, which opens in May 2 of this year. As well, on March 24 and 25, the centre is hosting a job fair with over 40 retailers seeking to fill more than 1,000 positions.

The project had high hopes of being successful when it was first announced in December of 2013. Since then, the landlord has announced that the outlet mall will be larger than first anticipated, spanning about 428,000 square feet over one level, housing about 100 retailers. Being that the centre is in Edmonton, it will be enclosed — something that is generally rare for outlet centres in North America. The partners have reportedly invested about $215 million into building the centre.

More than 1,200 new jobs have been created with the project — that includes more than 1,000 retail jobs, as well as about 200 construction- related jobs. On March 24 and 25, more than 40 retailers will be hosting a job fair at the Renaissance Edmonton Airport Hotel, Cartier Ballroom, between 11:00 am and 4:00 pm.

A unique feature to the centre is an ‘experiential market’ called SHARE, which “will bring together local producers, artisans and a local specialty coffee shop fostering a sense of the Edmonton community at the heart of the outlet experience”, according to the landlords. Other features listed include home delivery of purchases and even cell phone charging stations.

What’s interesting, as well, is that Simon Property Group originally had its own plans to open a competing outlet mall near West Edmonton Mall, and those plans were scrapped prior to a January 2016 announcement that Simon was partnering with Ivanhoé Cambridge to build the airport outlet project. The west Edmonton outlet would have been called ‘Edmonton Premium Outlets’ and would have been on the northeast corner of Anthony Henday Drive and Stony Plain Road.

The Premium Outlet Collection Edmonton International Airport has announced 70 retailers that will be opening in the centre, which includes a mix of anchors and smaller retail spaces. Here’s the list provided, followed by our opinions based on what’s already in the market.

Discussion: This is a decent roster of anchor retailers — though somewhat unremarkable considering that most of them already have stores in the Edmonton market. DSW, Forever 21, H&M and Marshalls all have multiple locations in the area, and Nike and Old Navy also have stores — though not necessarily with as much outlet product as what will be found in the new Premium Outlet Collection Edmonton International Airport.

The following is a list of the remaining 68 retailers confirmed for the centre:

Again, a terrific group of retailers will  open at the Premium Outlet Collection Edmonton International Airport, though many of the retailers listed already have stores in the Edmonton area. Retailers at the outlet might therefore be best served to market their outlet locations as having the ‘best’ assortment of discounts at the lowest prices, and exclusives might also be a useful way to drive much-needed traffic. It will remain to be seen how much of a draw the new centre will be to those living in Edmonton and surrounding communities, as well as to see if airport travellers will utilize the centre as part of their journey.

When we first reported on the outlet mall proposed for the Edmonton International Airport, we had expected Saks OFF 5TH and/or Nordstrom Rack to anchor the centre. We now know that’s not the case — nearby South Edmonton Common, which is considered to be the largest power centre in Canada, houses Saks OFF 5TH and in the fall, Nordstrom Rack will also open in the centre.

West Edmonton Mall, as well, features a wide range of retailers at various price points. On a recent visit, we discovered that the mall has leased space to some unique retailers, including a cannabis retailer that will occupy more than 10,000 square feet of space, and a Bitcoin retail space that will be unlike anything in Canada to date. West Edmonton Mall boasts more than 800 retailers and it’s working aggressively to create an even more compelling mix, in order to maintain market dominance.

We’ll report again on Premium Outlet Collection Edmonton International Airport around the time when it opens in May, as well as when we learn of more tenants — we’re told that up until recently, there were still vacancies that needed to be filled.