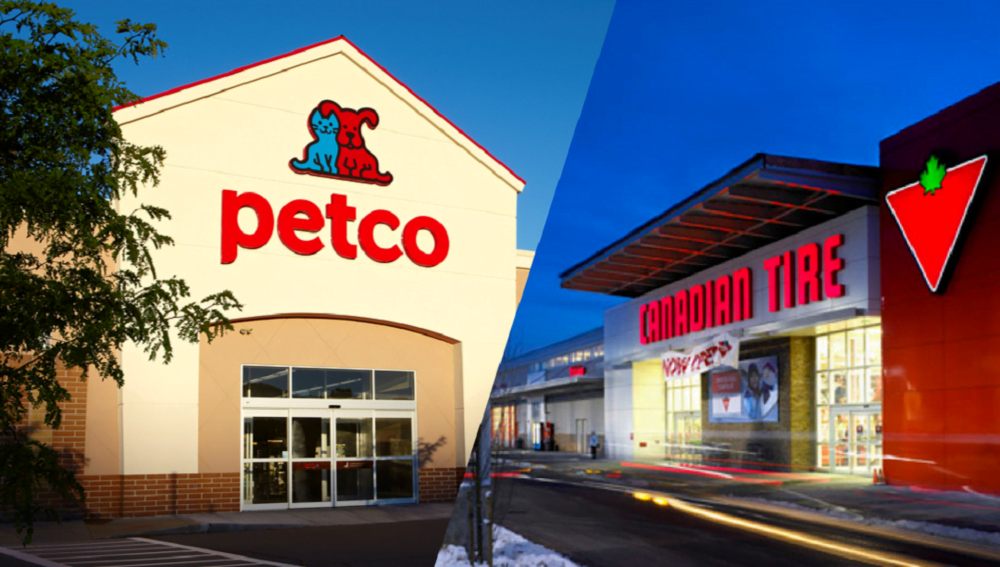 Canadian Tire has announced that it has partnered with US-based pet brand Petco, where Canadian Tire will exclusively carry Petco’s assortment of food, treats and accessories. It’s a significant move that adds competition to the already crowded pet-oriented retail market in Canada.

Beginning this month, Petco’s products will be offered in Canadian Tire stores as well as on the retailer’s e-commerce website. Canadian Tire says that the deal marks its entry into the ‘premium pet category’ while offering Canadian Tire’s ‘dedication to offering customers and pet parents high quality products at great prices’.

As part of the deal, Canadian Tire will exclusively carry Petco’s WholeHearted brand, which is a premium grain-free pet food line that is said to provide “superior nutrition affordable and accessible to more pet parents”, according to Petco. Starting in September, additional Petco products, including accessories, will be added to Canadian Tire’s pet assortment.

“As a leader in providing pet parents with everything they need to live healthy, happy lives with their pets, we’re thrilled to partner with Canadian Tire to bring the history and quality of the Petco brand to Canada,” said Rebecca Frechette, Executive Vice President and Chief Merchandising Officer at Petco.

The partnership makes sense. The pet industry is a multi-billion dollar business with about 57% of Canadian households having one pet. That number is said to be even higher for Canadian Tire shoppers.

“We know how important pets are to Canadian families so we’re thrilled to bring Petco’s offerings to Canadian Tire, where 65% of our customers are pet parents. Petco’s deep expertise in pet products, combined with Canadian Tire’s extensive reach in a thriving pet market is a powerful combination,” said Greg Hicks, President, Canadian Tire Retail. “Petco’s legacy as a global leader in pet products heightens the credibility of our suite of pet offerings, allowing us to strengthen an important category and expand our marketplace,” he said.

Privately-held Petco, based in San Diego, California, is considered to be a leading global pet speciality retailer with more than 1,500 Petco and about 85 Unleashed by Petco locations (a smaller-format neighbourhood concept) across the United States and Puerto Rico. It was founded in 1965 as a mail-order business selling veterinary supplies. The company also offers prescription services and pet supplies from veterinary-operated pet product supplier, Drs. Foster & Smith, as well as a range of pet care services and veterinary advice through its PetCoach platform. The Petco Foundation, which is an independent nonprofit organization, has invested more than $200-million since it was created in 1999 to help promote and improve the welfare of companion animals.

There’s already a Canadian connection to Petco — in November of 2015, the Canada Pension Plan Investment Board (CPPIB) and CVC Capital Partners acquired Petco for US$4.6-billion. That followed a failed merger attempt with Petco and competitor PetSmart.

It’s uncertain if the Canadian Tire/Petco partnership could eventually lead to standalone Petco stores in Canada, and the current arrangement might even be more ideal. Canadian Tire has a network of stores nationwide that are accessible to many Canadians, providing Petco with an expansive distribution network without the costs, time delays or logistical challenges of launching its own network of retail stores. At the same time, many brands are going direct-to-consumer in order to avoid the ’middle-man’ costs which are typical with wholesale arrangements .

As well, according to a report in IBISWorld, the market for pet stores in Canada is more than $2-billion annually with a year-over-year growth rate of 3.8%, with almost 1,500 businesses employing nearly 15,000 people coast-to-coast. The same report noted that the most popular animals include cats, dogs, fish and birds. Higher household incomes and rising consumer confidence are said to be factors contributing to increased pet ownership and related spending in Canada.

The Canadian Tire/Petco partnership will no doubt seek to take a bite out of Canada’s massive pet business, which includes a vast network of standalone retailers as well as pet-related offerings in larger retailers such as Walmart and Loblaw. The top four standalone pet retailers operating in Canada, according to the IBISWorld report mentioned above, include PetSmart, Global Pet Foods, Mondou and Pet Value — their combined total market share in Canada in terms of revenue was at about 44.1% in 2018. Numerous smaller chains also operate in Canada — names such as Petland, the Bone & Biscuit, Total Pet, Dogtopia and others can be found in regional markets. As well, there are plenty of independent pet retailers in Canada with one or a handful of locations.