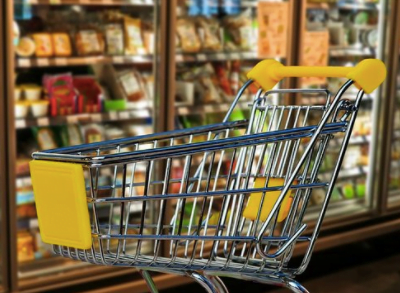 Total Canadian location-based retail sales were up 6.7% in 2017 versus the previous year, according to the latest Statistics Canada numbers. This is the best result since 1997 and a 20 year high. If e-commerce sales by non-store retailers were also included, it would add about 1.5% to the 2017 growth rate. Here’s a summary of the last 5 years.

The Automotive & Related sector clearly contributed the most to overall sales growth, with both vehicle dealers and gasoline station sales recording high increases in 2017. Food & Drug however was a disappointment, especially after a relatively good year in 2016. This was offset by strong results in the Store Merchandise sector, up 6.5% in 2017, an 11 year high.

As the chart above shows, the 3 month growth trend (orange line) has now dropped off from the levels set in mid 2017. The underlying 12 month growth trend (green line), after strengthening for almost 2 years, has flattened out. Nevertheless, both measures are at fairly high levels, so recent trends may well be more of a correction rather than a collapse.

December retail sales results have been reported to be below expectations. But this may be partly because shopping activity is being pulled into November due to promotions like Black Friday and Cyber Monday and by retailers’ efforts to start holiday sales earlier. For November and December combined, total retail sales were up 5.1% in 2017. This is below the average growth for the year, but still a respectable result.

The underlying 12 month trend for Food & Drug retail sales (green line in the above chart) slid steadily in 2017. The 3 month trend is tracking below this, implying further weakness ahead.

Sales at supermarkets & other grocery stores have been particularly slow, increasing just 0.9% in 2017, and even down 0.7% in Q4 alone. Specialty food stores did well however, with annual retail sales gaining 8.0%.

Retail sales at health & personal care stores ended 2017 up 5.7% for the year. While this is a respectable gain, it’s well behind the 13.8% annual increase recorded for 2016.

The underlying 12 month trend for the Store Merchandise sector (green line in the above chart) improved significantly in 2017. A retail sales gain of 6.5% was recording for the year, the best result since 2006. The sales trends however weakened slightly late in the year, although it’s too early to tell if this will continue into 2018.

The two biggest winners in 2017 were electronics & appliance stores with retail sales up 12.8%, and building material & garden equipment/supplies dealers close behind with an increase of 12.7%.

On the other hand, home furnishings stores’ retail sales were up just 0.8% in 2017, the lowest gain of all retailers in this sector.

Note that Statistics Canada is now suppressing the breakdown of general merchandise stores for confidentiality reasons. The figures in the table below are estimates based on previous trends.

The Automotive & Related sector continues to be the bedrock of Canadian retail sales. The annual increase in 2017 was 10.1%, a 7 year high.

Gasoline stations are experiencing high growth, with retail sales up 12.9% in 2017. Gasoline stations have now more than recovered the sales losses incurred in 2015 when gasoline prices significantly declined.

Automobile dealers just keep on setting sales records. Their retail sales were up 9.4% in 2017.

StatsCan started providing ecommerce retail sales data in January 2016. While the amount of data is limited, some trends appear to be emerging. Here are some results.

Overall, e-commerce represented about 2.6% of Canadian retail sales in 2017, including both pure play operators as well as the online operations of brick & mortar stores. Canadian consumers however also buy online from foreign websites, spending which is not captured in these numbers.

Results for 2017 show that Canadian e-commerce sales were up 30.6% from the year before, a much higher gain than for retail in general. But for Q4 2017, the year-over-year increase was 15.6%, indicating that e-commerce sales growth may be slowing down.

Note that location based retail is the same as that in the preceding large “By The Numbers” table. It’s what’s normally reported as Canadian retail sales. Except that it isn’t. Location based retail excludes another section called Non-Store Retailers (NAICS code 454), which covers electronic shopping and mail-order houses, which in turn is where (mostly) pure play e-commerce businesses are. For 2017, electronic shopping and mail-order houses had an estimated $8.8 billion in e-commerce sales.

For electronic shopping and mail-order houses, an estimated 82.7% of their sales are allocated to e-commerce. For the (mostly) bricks & mortar crowd, it can be estimated that just 1.2% of their total sales come from e-commerce.

In the final section of the above table, (mostly) pure play operators (namely, under electronic shopping and mail-order houses) generated an estimated 56.2% of all e-commerce sales in Canada, while (mostly) bricks & mortar location-based retailers’ share of e-commerce is 43.8%.

Ups and Downs in Canadian Retail Sales into Spring 2022: Strapagiel

Ed Strapagiel - May 1, 2022
Ed Strapagiel lays out his monthly analysis of StatCan numbers for the Canadian retail industry.