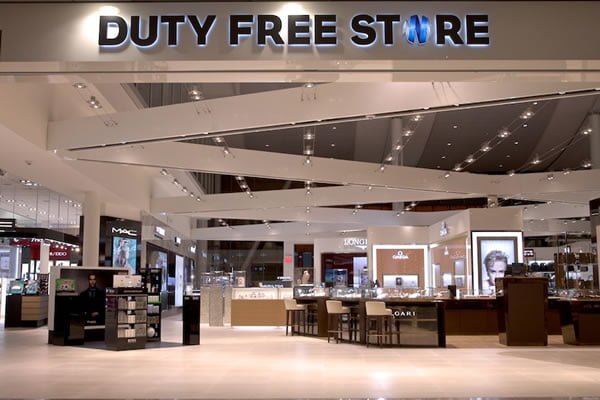 Barely 15 years ago, the retail offering at Toronto Pearson International Airport more closely resembled that of a low-budget 1980’s suburban strip mall. Chachka and tacky Canadiana, ranging from plastic CN Towers, to plush toy moose in RCMP uniforms were ubiquitous. Food court-quality burgers and fries, and day old heat-lamp chicken and veggies were some of the better food options on offer. The old, circular-shaped concrete bunker that was Terminal 1, with its low ceilings, poor quality florescent lighting, and musky odor was the main international terminal for Air Canada and most Star Alliance members.

When the new, and now current, Terminal 1 opened to the public in 2004, the retail offering still left much to be desired. More kitsch, more mediocre food, and a more questions about how Canada’s largest and busiest airport could build a brand new $4.5 billion terminal and leave the retail component so under-developed. Airports half the size, such as Vancouver International, had a retail offering that put Pearson to shame.

Anyone who’s ever traveled through Frankfurt, London Heathrow, Amsterdam, Hong Kong, or Dubai knows that an airport doesn’t just have to be utilitarian. Quite the opposite, in fact.  Airports can, and should be retail destinations unto themselves. For decades North American airports seemed to have missed that memo. But in recent years, large North American hubs are finally starting to catch up to their European, Asian, and Middle Eastern counterparts. And Toronto Pearson is at the forefront of an airport retail revolution that has made, and will continue to make both Terminals 1 and 3 virtually unrecognizable from 10 years ago.

For those who think airport retail is a frivolous “nice-to-have while you wait impatiently for your flight”, make no mistake, shopping, and in particular luxury shopping, has become such a huge part of the airport experience that it now accounts for as much as 53% of total revenue in the case of Dubai, and 30% in the case of Pearson. The goal is to increase that to 50%.

In the past two years The Nuance Group, which operates the duty free concessions at Pearson, has gone from zero to a hundred in terms of the luxury retail offering. The international Hammerhead (Pier F) now boasts boutiques from the likes of Salvatore Ferragamo, the largest airport Burberry boutique in Canada, Bvlgari, Gucci, Tumi, Omega, and North America’s only airport Longchamp boutique. Even the domestic pier at Terminal 1 has undergone a radical change and now includes a Victoria’s Secret boutique and Canada’s only standalone Jo Malone London shop. Nuance has gone on record saying that their Pearson operations are by far their best environment in North America.  And the numbers don’t lie – in December 2014, one passenger paid $20,000 cash for an Omega watch at the Omega boutique in Terminal 1.

Not to be ignored, Terminal 3 is next in line for a major overhaul, and is currently undergoing the same kind of retail transformation that Terminal 1 went through.  Interestingly, back in 1991, Terminal 3 hosted North America’s only Harrods store. It was a mini-version of the iconic British department store, and it closed shortly after it opened as Toronto and the rest of the world plunged deep into recession. The closing of Harrods seemed to be a turning point in the direction that Pearson took with its retail development. Less risk, less innovation, and a whole lot more indifference to the benefits of airport retail.

As more and more of the world’s wealthy travel, Pearson, almost more-so than any other airport in North America, is perfectly positioned to reap the rewards of those who will inevitably shop more as they transit through the airport. As it stands right now, Pearson is the fourth largest port of entry into North America behind New York JFK, LAX, and Miami. Overall international traffic in North America is second only to JFK, and for the past four years Pearson has been the fastest growing airport on the continent. In 2013, the Mastercard Global Destination Cities 2013 Report ranked Toronto first in North America and thirteenth in the world for the city with the fastest air connectivity growth.

Air Canada is concentrating its entire long term growth strategy on Pearson as its global hub, and that strategy is paying off. Already passing the 38 million passenger mark in 2014, Pearson is well on its way to cracking the 40 million passenger milestone for the first time in its history. For some perspective – passenger volumes at Pearson are higher than Canada’s second and third busiest airports combined. Total passenger growth at Pearson is close to 60% higher than Canada’s next three busiest airports (Vancouver, Calgary, and Montreal) combined.  International passenger traffic is higher than Canada’s next three busiest airports combined and international traffic growth volumes are over 80% higher than international traffic growth volumes at all three of Canada’s next busiest airports combined. In other words, passenger growth and volumes in Canada are disproportionately in Pearson’s favour. Most of that growth is coming from China, South America, and the Middle East, where wealthy travellers are fuelling a retail revival at airports the world over. Pearson is the first building most people travelling to or through Canada see, and it should represent not only the city of Toronto, but Canada as a whole, in the most positive way.

For Pearson, the goal is clear. Acquire a larger piece of the traveling pie and have more people connect through the airport. Roughly 33% of all passengers passing through Pearson are connecting passengers – the largest proportion in the country. Connecting passengers tend to stay longer and shop more than just “origin and destination’ passengers – so more connecting passengers means more retail options. In a recent interview with the Toronto Star, outgoing Chair of the Greater Toronto Airports Authority (GTAA), Vijay Kanwar stated that Pearson “should have a Bloor St. inside our terminal”. Arguably, a reference to Yorkdale Shopping Centre would be just as appropriate.

European, Asian, and Middle Eastern airports have long known that the airport experience is more than just a means to process passengers and get them on their way. An airport can be a destination unto itself. Airports such as Dubai and Hong Kong can barely be distinguished from high end shopping malls, but one thing is clear – everyone who travels through those airports can attest to the fact that it’s a memorable experience.  Toronto Pearson’s goal to be the Hong Kong airport of North America is the right direction for the airport. And it just so happens that the current CEO of the GTAA, Howard Eng, ran Hong Kong airport for 17 years before joining Pearson.